One of the most successful female Table Tennis players in Africa Dina Meshref, has urged Nigerian Table Tennis players to participate in more international tournaments, as it will help them improve. Dina made this revelation in a live video chat on the Program ‘FANS FORUM’ on BCOS TV with Boluwaji Ogunmola. Monitored by Ojb Sports.

The Egyptians are the biggest Table Tennis playing nation in Africa, the reason for this exploit according to Dina, is down to the team performing in various international events.

“we participate in a lot of international event, I think that is the difference, I think it will be very useful for Nigeria Table Tennis to play international events. Meshref also stated that she alongside some Egyptian players most times go to China to learn more about the game, while admitting their dominance in the game. She also praised the Chinese as the biggest Table Tennis Nation in the world.

“Talking about the Chinese, they are fully dedicated to Table Tennis, they have a high number of players playing the game, so they can pick from the best, and also because of the way they train. I have been to China and to see how they train, they really work hard, We try to be very good, Africa players need to go there to learn.”

Dina explained that her mother never wanted her to start table tennis, instead she  wanted another sport, even though she (Dina) is a daughter of two Table Tennis Champions.

“My mother did not want me to start table tennis, she also wanted me to do whatever i wanted to do, so i started a Table Tennis, with Al Ahly my club, i did well for a whole year, everything was working fine for me” 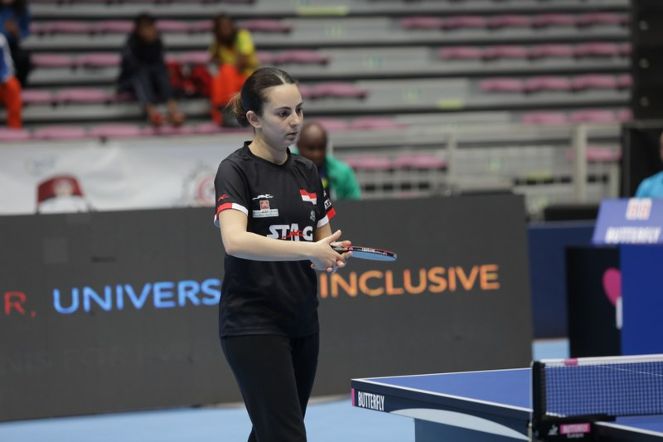 Apart from Table Tennis Dina Meshref revealed that she can swim, especially when her parents usually take them to the Swimming pool, in a bid to teach them how to swim.

” I did Swimming, in Egypt all the parents prefer to teach their kids how to swim, during vacation or holiday we use to go to the pool or beach to swim, that is why most of the Egyptian kids know how to swim”

Dina, being the best women Table Tennis player, is a no-brainer, because she is a daughter of two Table Tennis Champions. She has been able to pick up the baton at a very young age. Winning virtually all age grades competition.

The young lady has amassed a lot of medals for herself.She won her first All African Games medal in 2016, before heading to Brazil, Rio De Janeiro for the Olympics that same year, but she never got a medal there. No African country has been able to win the Olympic gold recently.