Real Mallorca 15-year-old forward Luka Romero on Wednesday became the youngest player to feature in a Laliga game after a cameo appearance in their 2-0 defeat to Real Madrid.

He was born in Mexico in 2004 to Argentine parents. His father, Diego was also a footballer. Diego played for Formentera on the Balearic Islands, which is where the family have since settled.
He trained with Mallorca’s senior team for the first time on June 1st.

Romero wrote on Twitter after the game “It was an unforgettable moment,”

“Thank you to everyone on the technical staff and at Real Mallorca for giving me this opportunity. I will never forget this day. It was a shame to lose but we keep believing.”

Vicente Moreno his coach was seen talking to Romero before he brought the youngster on,

“I tried to just keep him calm,” Moreno said. I put my hand on his heart and I could tell it was beating very fast, which is normal for a kid of his age. He deserved to play and that’s the reason he came on. 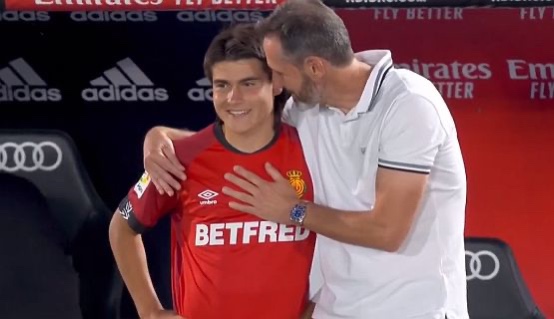 We don’t look at age. He has been training well and this seemed the best way to increase his motivation. He is a great player and I think in the future he will give us a lot.”

At age 7 he did a trial with Barcelona in which he excelled but was too young to stay alone in La masia according to Spanish FA guidelines.

He broke an 80 years record held by former Celta Vigo defender Francisco Bao Rodríguez who made is debut against Sevilla in December 1939, he later made only six league appearance for Celta Vigo.

Mallorca are fighting relegation in La Liga. They currently occupies the 18th position, three points away from safety with seven games left to play.