While it seems that the City of Manchester was set to receive an European title this season, such hopes and thoughts have been buried, quickly, with Manchester City losing out in the Champions League quarter finals to Lyon 3-1, and fellow city rivals Manchester United also disappointed in the other European competition (UEFA Europa League), as they fell to Sevilla 2-1.

For Pep Guardiola as a Manchester City manager, the only challenge he as in front of him is winning the UEFA Champions League, the only major title he as not won since he joined the 2018/19 Premier League champions.

Pep has tried for the past two seasons, losing out in the first Semi-final to Liverpool, both home and away, before facing another dramatic defeat to fellow PL rivals Tottenham last season, with some eye-watering VAR decisons. With what the emergence of the COVID-19 pandemic has caused, UCL games for this season where reduced to just one, instead of usual two-legged affair.

See also : Bayern not getting carried away by Barcelona

Manager for Man City, Pep Guardiola days before lyon’s defeat, stated that the new one-game system would favour Manchester City amidst hullabaloo faced in previous two-legged affair, meanhwile Lyon who have to win the UEFA Champions League to seal a spot in next seasons edition, had other ideas, as they pumelled the Cityzens 3-1 to scale through.

NEXT FOR CITY and UNITED

The defeats means Pep Guardiola waits for a UEFA Champions League trophy with Manchester City, as they have to go again next season.

The Red side of Manchester United are arguably having a season to forget, after been ousted out of the UEFA Europa League by Spanish giants, Sevilla. The defeat means Manchester United will go trophy-less for the 2019/20 season, losing out in the semi-finals of all the tournament played the season. The Old Trafford side have now lost 3 semi finals in a row this season under OGS (Manchester City, Chelsea & Sevilla). 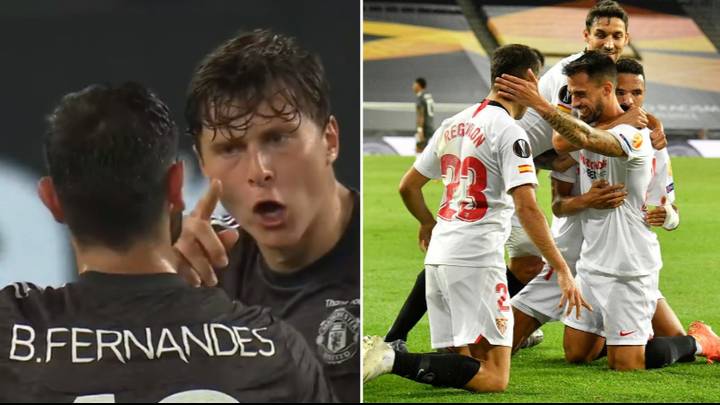 For Manchester United, one major achievement this season, was finishing the 3rd in the EPL, picking a slot for next year’s UEFA Champions League.

The Red Devils tried as much as possible to beat the herculean task of qualifying for Europe next season, after beating-off competition from Leicester City in the final day.